Difference between revisions of "CQM Graphs"

As stated in the image above, the dark red is customer uploading, and the darker green is customer downloading. The key on the right does label these as Red=rx Green=tx. As the graph is created at the AAISP side, the Tx/Rx is the view from AAISP, i.e. Rx is what AAISP has received from the customer.

The colours may vary and we even allow users to configure colours individually (useful for people with colour blindness, etc.). It is also possible for us to show graphs with only some of the fields which can make some information clearer (see #CQM Graph options). 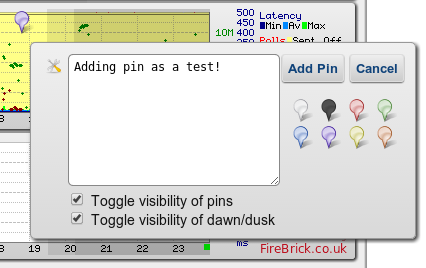 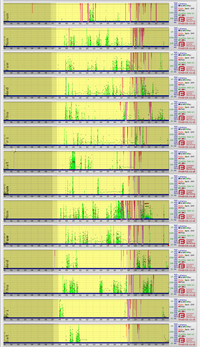 The usage based tariffs are metered based on IP traffic. They do not include LCP traffic at all, so these LCP echos are not costing you anything. They do use some of your bandwidth. One ATM cell (53 bytes) is sent each second. On an 8M line this is 0.005% of your downlink bandwidth. Even with limited uplink such as 250kbit/s, only a tiny fraction of a percent of the bandwidth is used for the monitoring.