Difference between revisions of "FireBrick Portmapping"

The principle is that you describe the original traffic (source/target interface, IP, protocol, port etc) and then define a Rule with what you want to happen to that traffic - eg, set a new target IP, port and enable NAT.

Typically, your FireBrick will be the original target of the traffic, it will have a public IP on one of its PPP interfaces perhaps. If we take an example for RDP, then we can crate the rule-set as follows: 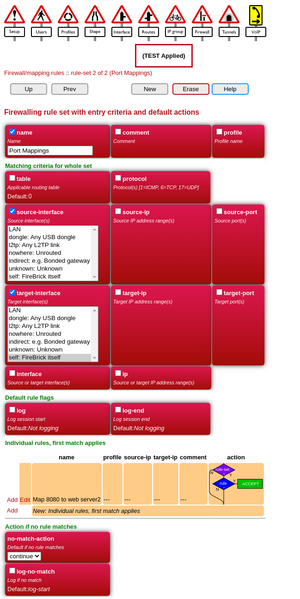 And then add a rule for RDP to this rule-set:

You can add more requirements as needed, such as changing the port if needed, or adding source IPs so as to restrict access to known IPs. You can also use profiles to control access further.

If you have more port mappings then you can add more rule's as required, eg to add access to an internal web server you could map port 8080 to port 80 of the internal webserver: 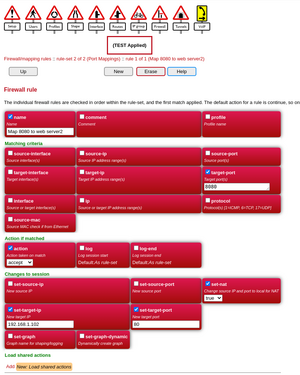 You can then test this rule using the built in Firewall test diagnostic.

If you put in:

Then you should see it match your rule and change the target IP etc: