From AAISP Support Site
Revision as of 01:22, 18 August 2018 by Reedy (talk | contribs) (clean up)
(diff) ← Older revision | Latest revision (diff) | Newer revision → (diff)
Jump to navigation Jump to search
A checked version of this page, approved on 18 August 2018, was based on this revision.

The VMG1312 has a WiFi scan option that will show you the noise on the wireless channels. This setting can be found on the web interface: 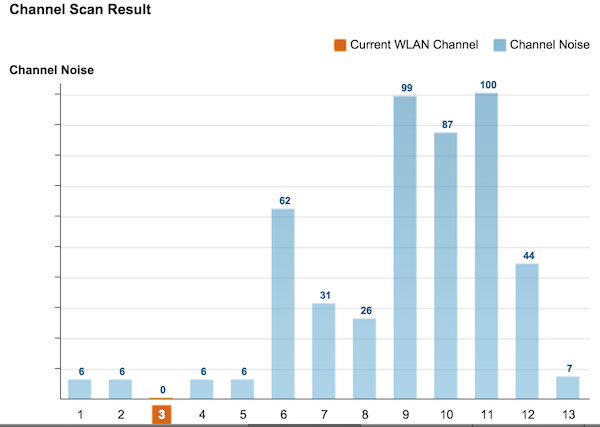 WiFi scan result example, here 3 is the channel in use, and 11 is the most noisy

By default the router will choose the channel with the least noise. If required though, the channel can be set manually via the web interface

We remove TKIP from the WiFi settings and only have AES. This is due to the insecurity of TKIP. Only very old WiFi devices will require TKIP, it can be enabled on the Router's web interface if required.

By default, when configured by AAISP, the Wifi is set to 20 MHz. This can be changed via the web interface to 40 MHz if required. 20 MHz will mean less interference with other channels, but 40 MHz may give faster speeds if there are a small number of other WiFi access points in your area.

We have seen odd problems with WiFi on 40 MHz and Windows 10 not being able to see other devices on the (wired) network. This may be coincidence, but changing to 20 MHz meant that these problems went away!