Calls made can be recorded and then emailed to you. The recorded sound files are in stereo - with the 2 parties on separate channels. Optionally, callers can be warned, with a pre-recorded announcement, that the call will be recorded. Recordings are not kept on A&A servers once they have been emailed.

There are options as to which calls are to be recorded:

The email can then contain the recording as a sound file in the following formats:

With warning enabled (regardless as to whether we are doing the recording or not) the caller will be played a message saying that the call is being recorded.

It's useful to have the option to warn but not for us to actually record calls in the case of the recording being done by end user equipment and you'd like us to play a warning and for you to do the recording.

However, there are occasions when you do not want a call recorded, e.g. when people give credit/debit card details.

Here is a simple guide to controlling call recording on the phones. 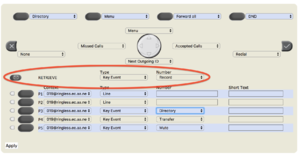 To set this up on your phone you need to configure the phone to send a SIP INFO 'record: on'/'record off' message.

Some phones, e.g. some of the SNOM phones have a dedicated 'Record' button. If you've not got a 'Record' button then it should be possible to set up one of the other buttons to do this job instead.

For example, on a SNOM D305 phone, which doesn't have a dedicated Record button, this is done under the 'Function Key' settings in the web interface. You can set say the 'voicemail' key to be the record key by setting:

The phone will then send SIP 'Record: on' and 'Record: off' messages when pressed and a beep will be heard on the call when recording is toggled.